Recognized nationwide for his artistry in the field of opera and oratorio, Ron Williams continues to gather acclaim for his work onstage and in the concert hall. He has sung leading roles with several opera companies nationally, including San Francisco Spring Opera, Michigan Opera Theatre and Opera San Jose, where he created the role of Edward in the world premiere of Alva Henderson’s The Last Leaf.

Locally, Williams debuted with Boston Lyric Opera in the revival of Kurt Weill’s Lost in the Stars, receiving critical acclaim from The New York Times. He portrayed nemesis Nick Shadow in the much-heralded production of The Rake’s Progress with Boston’s Opera Laboratory Company at  Massachusetts Institute of Technology. The Boston Globe praised his performance of Figaro in Opera New England’s The Barber of Seville. Ron made his debut with Longwood Opera in the title role of Verdi’s Rigoletto.  With Greater Worcester opera, he has been seen as Escamillo in Carmen, Count Almaviva in Le Nozze di Figaro and will perform the title role in Don Giovanni in June.

Mr. Williams was a regional finalist in the San Francisco Opera National Auditions. He received the College Foundation Award from the California Music Teachers Association. Ron remains passionately interested in arts education for young audiences and has performed at the National Children’s Arts Festival at the John F. Kennedy Center for the Performing Arts in Washington D.C.

Mr. Williams maintains a busy concert schedule having performed with Cantata Singers, Chorus North Shore, Symphony Pro Musica, as well as the Dartmouth College Symphony (N.H.) where he sang a concert version of Beethoven’s Fidelio. Ron took on the role of the biblical narrator in a performance of King David by Arthur Honneger with The Masterworks Chorale under the late Alan Lannom. Ron was seen in the one-man opera of Domenico Cimarosa, Il Maestro di Cappella with Boston Civic Symphony. He made his debut with Boston Cecilia in Britten’s Cantata Misericordium, and has performed the role of Christus in J.S. Bach's Saint Matthew Passion, both under the direction of Donald Teeters.

Ron made his European debut with the Düsseldorf Chamber Orchestra in Germany. His stage debut was in Saint Gallen, Switzerland and has performed on the European stage in several countries including The Netherlands, France, Denmark Austria, Switzerland and Spain.

An artist committed to bringing to the stage the works of twentieth-century American composers, Ron has researched and performed works of Hale Smith (Mediation in Passage) and Ned Rorem (The Lake of Innesfree). Ron has been involved with the premiere of several works locally including Elmer Gantry, a new American opera by Robert Aldridge and Herschel Garfein. 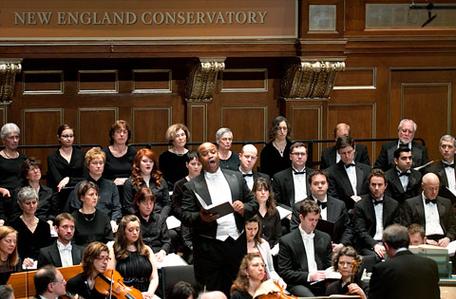 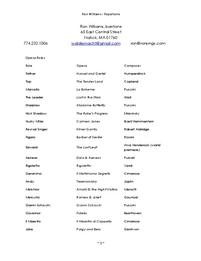